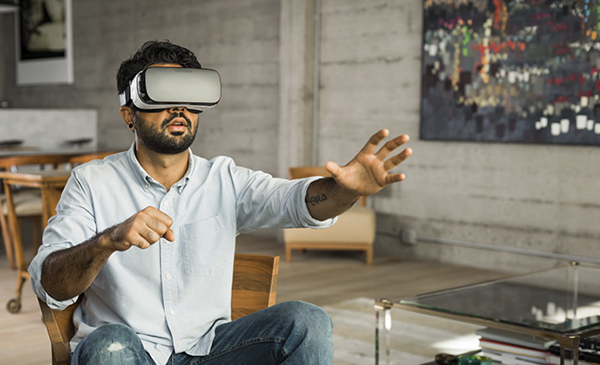 Virtual Reality (VR), sometimes referred to as immersive environment, is a computer-generated 3D environment that can simulate the real world environment. A user wearing VR headsets can feel the same experience, as he/she would have in the real world. The aim of this pilot study is to investigate the feasibility of 3D VR Headsets in jobsite planning and management, from educational as well as industry implementation perspectives. We found that VR headsets are indeed very beneficial - allowing the users to immerse into a near-actual environment. The users were able to interact, identify, and gain an in-depth experience pertaining to jobsite management. The application of textures, materials and site development were found to create a life-like feeling. Each participant became physically involved in his/her exploration, exhibiting natural movements outside of the VR environment.

This is a summary article based on an original contribution published in the proceedings of CIB World Building Congress 2016, Vol 3 pp. 462-473

The definition of virtual reality is quite straightforward. Virtual means near, so the term Virtual Reality (VR) basically implies near-reality. VR refers to a computer-simulated reality computer technology that replicates an environment, real or imagined, and simulates a user's physical presence that environment in a way that allows the user to interact with it.  VR can be extremely useful in the construction industry. Among possible applications, VR technology could significantly aid in jobsite organization, which comprises of a substantial number of tasks spanning from planning to execution stage.

However, to develop an effective jobsite organization plan, a wide range of factors need to be taken into account. As with the construction of any project, unforeseen complications most likely exist. While preventing all of these issues may not always be possible, having a clear strategy in place to resolve a potential problem can lead to significant cost and time savings. According to Voigtmann and Bargstadt (2008), jobsite logistic processes take up to one third of the total execution time on site, and well-planned and executed construction logistics have the potential to reduce the construction time by 10 percent and the cost by 4 percent in outfitting processes.

This research was conducted using the Oculus Rift Development Kit 2 VR Headset as shown in Figure 1. The Oculus Rift was chosen for its support and integration with Unity 3D® software. The Unity 3D® software was an essential tool for digital model development. For now, Oculus Rift has not yet been launched in the construction industry as a commercial product. However, it has the potential to revolutionize the industry in several aspects. With time, the VR headsets will evolve, with applications becoming more apparent and widespread.

To test the feasibility of 3D VR headsets in construction education and practice, this pilot study focused on the area of jobsite organization. The following were objectives of this: (1) to study current industry workflows for site logistics, layout and planning; (2) to investigate the feasibility of VR Headsets for jobsite planning simulations; and (3) finding ways on how to enhance the effectiveness of jobsite management through the use of VR Headsets.

The study was conducted utilizing mixed methods research using both qualitative and quantitative research instruments. The study was divided into three phases: 1) Conceptual Planning, 2) Modeling, and 3) Implementing and Validation.

The purpose of the conceptual planning phase was to explore existing uses of VR Headsets in construction industry and to develop a detailed plan for creating the jobsite organization models. During an extensive literature review, the following referenced areas of application in construction were identified: (1) Site layout and planning; (2) Rehearsing erection sequences; (3) Progress and monitoring of construction processes; (4) Evaluation of construction scenarios; (5) Inspection and maintenance; and (6) Healthy and safety training.

A model simulating a jobsite was created in this phase. The following software were selected: (1) Autodesk Revit® for creating the 3-story structure, (2) SketchUp® for editing and exporting all the material stack, equipment, characters and related families needed onsite, (3) Unity 3D® for rendering the model, (4) MonoDevelop® for creating the script; and (5) Camtasia Recorder® and Camtasia Studio® for producing the end product videos. Oculus Rift® headset was used to view the model in Unity 3D®. The terrain texture mapping was first created in Unity 3D® software. Unity® is a cross-platform game engine developed by Unity Technologies and is used to develop video games for PC, consoles, mobile devices and websites. A 3-story steel framing structure was created in Autodesk Revit® and then imported into Unity 3D®. All the material, equipment and characters were imported from the SketchUp® warehouse to make the simulated jobsite looks real. Figure 2 shows a screenshot of the model.

After rendering the above model, three scenarios were created, stressing how variation in jobsite organization plans can affect the effectiveness of site utilization. Scenario 1 and 2 were created based on the specific location of this project. Differences of site orientation, site access, crane placement, equipment path, material storage and waste access between these two scenarios. Scenario 3 was created as a vacant jobsite and its purpose was to allow users to create an ideal jobsite. All the material and equipment were placed off-site. By dragging and placing the material and equipment onsite, the end users were able to create their own jobsite layout.

For model testing and relevant data collection the following steps were performed: (1) Opinions were collected from a focus group consisting of eight BIM professionals; (2) After considering the opinions recorded in step 1, modifications were made to the model. Fourteen construction students were then invited to test the model. They were shown how Oculus Rift works in the above-mentioned scenarios. Afterwards, a questionnaire was used to gather their opinions as how they think of trying on Oculus Rift compare to the traditional methods; (3) Responses were analysed using descriptive statistics. Based upon these responses the advantages and disadvantages of Oculus Rift and its use in the construction industry were identified.

Analysis of Responses of the Focus Group

A focus group of eight BIM professionals was formed. The three scenarios and accompanying narrated videos were shown to them and their opinions were recorded. The participants were first shown the 2D site plan, then the traditional 3D site plans, and finally the 3D site plans in immersive environment.  They were asked to identify strengths and weaknesses in all the models. They were also asked to identify any advantages of utilizing the Oculus Rift®. Participants considered Jobsite Virtual Tour as best candidate for VR applications. Some specific comments were as follow: (1) Very promising way to assess potential danger without being put in the actual situation. (2) It reminds me of a game. Its very interactive and effective. I think its an interactive idea for safety training and the immersive environment is definitely useful. (3) It shows actual situation, real life experience rather than Revit model.

The following comments were collected for the application of VR in jobsite management: (1) Crane placement has a great deal to gain from a VR interface. This would allow workers to see where a jobsite is in relation to the crane. The improved awareness would be beneficial for jobsite safety and planning.; (2) Was a good tool for identification and orientation of the jobsite, which provided a better understanding of what to expect on the site.; (3) Slower assessment but you get a real life hands on idea of the site layout.; and (4) Very beneficial when determining jobsite area and organization as well as safety.

At the end of the focus group session, the participants were asked Is your company currently using or plan to use the Oculus Rift®? Among the eight BIM professionals, five said No, two of them were in testing and researching stage, and one company currently utilizing it.

Analysis of Responses of the Questionnaire Survey

Fourteen graduate students with some construction experience were invited to participate in the testing process. Each participant was given 30 minutes to test all models (i.e. the 2D site plan, the 3D site plans and 3D walk-through model using Oculus Rift®) and then asked to complete a short questionnaire. Key words identified from the focus group discussion were used for opinions measurements in the questionnaire. Respondents were asked to indicate the level of possible advantages that Oculus Rift® offers in jobsite organization. Some results are shown in Figure 3.

Of the five measurements indicated that Oculus Rift® offers Definitely Probable to Very Probable offer advantages in jobsite organization. Following are some specific comments from the survey respondents:

Crane placement has a great deal to gain from a VR interface. This would allow workers to see where a jobsite is in relation to the crane. The improved awareness would be beneficial for jobsite safety and planning.

Was a good tool for identification and orientation of the jobsite, which provided a better understanding of what to expect on the site.

Slower assessment but you get a real life hands on idea of the site layout.

Some users complained about motion sickness, which could be directly related to the amount of time spent in the VR environment.  Collective feedback from participants indicated there is a strong interest in learning more about VR headsets in the construction industry. The participants interacting with the built scenarios and being able to identify key aspects as well as conflicts confirms VR as a viable option for jobsite management. Many participants wanted to explore beyond the built scenarios such as visiting the surrounding site and testing various site logistics options to obtain the best combinations (e.g. best location for tower crane placement).

This pilot study aimed to test the feasibility of 3D VR headset applications in construction practice and education with focus on jobsite management. The results showed positive responses from both industry professionals and students. VR headsets and their applications in the construction industry have endless potential. Overall, we found that VR headsets are indeed very beneficial - allowing the users to immerse into a near-actual environment. The users were able to interact, identify, and gain an in-depth experience pertaining to jobsite management.

From this research, we have also uncovered a number of limitations concerning the effective use of the VR Headset such as: (1) Single user limitation. While conducting focus group, other people have no visibility of what the tester could see in the virtual world. To enhance communication and interactivity, a projector connected to that computer could be used to show the inherent movement of the user to other participants; and (2) Improvement in model quality. Some further improvements to the 3D immersive model could be made. Specifically reducing the size of the model to eliminate the lag while moving in the model and using more real information to rationalize the model.