Digital solutions require data in order to work. Various entities, from the authorities to automatic sensors, accumulate valuable information property. It is increasingly common for new services to be based on the processing of large data masses or utilization of real time information. As the amount of information increases, the adequacy and reliability of data transfer and storage capacity are emphasized. The transparency of interfaces and data sharing are key to market-based application and service development.

The society’s technological revolution and the tightly associated digitalization of functions and services have quickly advanced. The underlying reasons are the increased popularity of smart devices, enhanced telecommunication network capacity, and greater supply of various applications and cloud services. Change and new phenomena have brought about a developing terminology – cyber safety, big data, cloud services, the Internet of Things, 5G, augmented reality, and machine learning, among others, are examples of terms which have also become familiar in the real estate and construction industry.

Even though digitalization itself does not yet have an established unambiguous definition, the comprehension of its content has expanded continuously. From a technical point of view, it is seen as the integration of technology as a part of everyday life by digitizing image, sound, documents or signals – hence, according to the narrowest interpretation, digitalization means converting data into a digital form.

From a technological point of view, then, what is meant by digitalization is the general development due to which the use of digital applications and internet has become more popular. Particularly the number of devices and machines connected to networks is rapidly growing in both companies and homes. This so-called Internet of Things is currently estimated to be connected to approximately five billion devices. The majority of those are industrial automation systems and robots that are controlled and monitored over a network. However, the new technical building systems and media and entertainment devices in homes also almost invariably include a network connection option. The number of devices is anticipated to grow globally to at least 20 billion by the year 2020.

Grade: In built environment design, data modeling is already part of everyday life, and its use in building production is increasing. The digitalization-promoting programs launched in the industry boost and direct development together with the ample supply of software, applications and technologies. Public administration has, for its part, actively developed electronic services and opened its data sources, even though many silos still remain. In practice, technological opportunities have increased much faster than they have been utilized in the industry, meaning that the real estate and construction industry has partly fallen behind the general development. 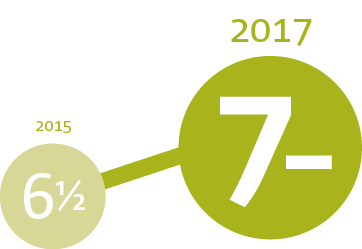